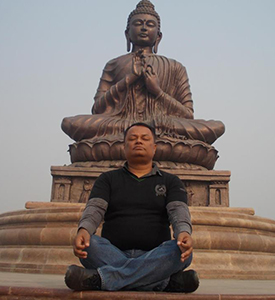 A hardcore corporate professional with outstanding management qualification turned himself into the world of spiritual engineering as his inner interest since childhood was to repair the whole universe into the real shape.


Rigorous studies, life changing experiences and enlightenment through meditation for the last 10 years paved his mission towards perfection He denounced his lucrative career and devoted his life to the betterment of human soul that has lost its purest form due to so many contradictions & abstraction in this COSMIC world.


Align for new you ( Remedies for discomfort): Meditation awakening with the life force energy, Date with your real self.


“Meditation is a process to merge with nature.” In today's scenario it has become a necessity the entire humanity to come in contact with the nature as we have forgot the real sense of humanity, as a result of which the total social set up has been going through a state of mental unhygienity. To neutralize the adverse effect of this imbalanced situation, a simple and effective way is to meditate for a while for a noble purpose for the entire humanity.


The word mediation has a healing power in itself and it cleans the entire negative aura which is diluted in our atmosphere and unconsciously we are being affected by this. As a result of which we develop stress, failure, anxiety, unacceptance attitude, poor health, poor concentration or any kind of discomfort in ease. So, I want to introduce my self as an instrument to the common mass and wish to help them to get rid of such kind of situations as I have been doing this for so many years and have proved myself very beneficial to the practitioners.(Corporate, Schools, NGOS and individuals) The process comprises of the undermentioned few simple steps.

According to Indian standards Ghaziabad is a small town, but it is also the largest New Dehli “dormitory”, with a population equivalent to the entire Croatian population. There is an estimate that there are around 30 000 “street children” in Ghaziabad. The Sinha family; Munesh, his wife Sonali and their eleven-year-old son Shamil, are three remarkable people taking care of those children through their Param Pranyog organization. Munesh and Sonali are yoga teachers, and they give great attention to the holistic lifestyle. They try to pass the same to the children, because they believe that mental and emotional health is just as important as the physical. Fourteen years ago, they both resigned their jobs in big companies and dedicated their lives to the care of the “street children”. When you ask them why they left their well-paid jobs, because they were both on “high” positions, their answer is simple, “money doesn’t provide happiness and it’s not the purpose of life”. Together with the Sinha family, another 25 people are involved in the education and care of “street children”, but Munesh and his family need to pay them for their work. Several families, friends and neighbors, as well as ambassadors of the Param Pranyog organization help them financially, but the majority of needs are financed by the Sinha family, from the schools of yoga and meditation, which of course is not sufficient to cover all expenses most of the time. The Sinha family struggles every day to feed around 500 children, educate them, and provide them with the necessary emotional and medical assistance at three locations in Ghaziabad, which consist of one piece of land and two little houses, for which they have to pay rent. Once the children reach the age of eighteen, the family tries to find them a job to be able to take care of themselves and for their families in the future.

The first location, literally a piece of land, is an “outdoor school”, which takes 450 children from the slums, every day. That piece of land and some canopy for shade is their classroom. They have neither walls nor a roof to protect them from the heat and the cold. School desks are something that they can only dream about, unlike most children of their age born in happier circumstances. An additional problem is that almost every year when their lease is canceled, they have to move the location of the “outdoor school”. This is very disturbing for the children, and some of them give up further education if the new location is too far from the slum.

Another school for forty children is located in a rented house in the vicinity, where children sometimes stay overnight, especially during the rainy season. Many of them are very talented, but probably will not have the opportunity to develop their talents through further education, because they have no sponsors to finance them. Regardless of the difficult living conditions and their uncertain future, they are children with big hearts; always smiling, and they will proudly show you their drawings, notebooks and poems and make it clear what they would like to be once when they grow up.

The third and final location is a home for twenty-eight children, so-called “Lost ones”, of which four of them are not able to talk, because of the traumas they have experienced. Most often they are found at train and bus stations, because they escape to the city looking for a better life, or someone just left them there, left them to take care of themselves. Munesh, his family, and others involved in the work of the organization, provide them shelter, food, medical care and education, but also try to reconnect them with their parents, if they can find them. Most of the time parents don’t want them back, or children don’t want to go back for many reasons, but mostly because of the physical harassment and abuse which they have suffered. Beautiful four-year-old Dolly stands out as the only girl among the twenty-eight children. In January 2012 at two in the morning, Munesh and Sonali found her crying at the train station and they took her with them to a shelter. Dolly has never been able to remember where she came from by train; she just knows that she was left alone at the station. The search for her parents is unsuccessful until today.

NOTE:No connection with any religion. It's a key to infinite satisfaction.